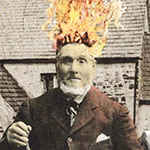 My name is David W. J. Lloyd, and I’m a visual artist / producer based in South Wales. I’ve added the W. J. to the middle of my name not as some grand posh gesture, or because I think I’m special, but to differentiate myself from the 1000s of other David Lloyds around the world! If you can bear it, I’ll bore you a bit with my background and what fires the work I’m doing at the moment.

These latest pieces represent the distillation of the experiences of decades of working in the creative industries in Wales and the realisation of those enduring themes that drive me. These new images owe their inception to my creative inspirations which include Welsh mythology, old wife’s tales, folklore, urban legends, atmospheric light, uncertain narratives, vernacular photography and traditional formalities.

The finished images are presented as formal portraits from another age and place where decaying gods, deteriorating materials and uncertain morality all collide. In these mixed media pieces the narrative both alludes to our world and that of another unknowable reality. Utilising found vernacular photographs, digital manipulation, mixed media and high-quality Gicleé printing processes in their completion, these art prints are painstakingly created over many hours and days, building up layer by layer until a satisfactory final image is produced.

Some are on the theme “In Annwn, Everything Is Fine” – alluding to the Welsh otherworld of the Mabinogion and mythology, an ancient realm where magic is real, and the strange is every day. It is a place of great dreamlike beauty and plenty, of imagination and old beliefs, hidden from the modern world. Annwn is an excellent vehicle for me to free my vision from the constraints of our reality and create the sort of imagery that has resonated with me from a young age.

Others are on the theme of “Day’s Gone”, which expands beyond Annwn into the wider world, but one still tinged in magical realism and folklore. It is a dark place loaded in pagan beliefs and practices, a place where giants are real, folk dancers frolic and the uncanny countryside come to life. It is the world of the “Wicker Man” and the “Witchfinder General”, the Pagan feasts that marked the passage of the agricultural year, of gothic Americana and the migration of crows. It’s the world of the strange unease that comes from walking in a field in the dark, the creak of the hedgerow and the grunt of the trees. It is both magical and inherently human, mundane and never to be taken for granted.

When considered as a whole, my digital artworks, photography, film-making and painting share a common aesthetic and considerations in their creation. I’ve always been fascinated by atmospherics, strong sunlight shining under leaden skies, harsh contrasts, narrative compositions and theatrical lighting. There is an element of darkness to my work, but also humour and lightness. I work these into everything because they interest me, they get me excited, and they inspire me to keep going.

Since training as a fine art painter in the early 1990s, my career has taken many unexpected creative turns in the intervening years. I left Falmouth School of Art and Design with a degree in fine art. Following that I concentrated on painting, my works were exhibited around the UK and sold to private collectors around the world. The painting took a backseat as I went to work for the BBC, my creative talents diverted into production, photography and other forms of media production. On leaving the BBC, I concentrated on online media and film production, where there was always a strong visual element to all the work I’ve done, and continue to do.

In recent years I’ve begun painting and drawing with a fresh focus alongside my other production work. I’ve used the image manipulation skills I’ve built up over the years to help realise an exciting new phase of my work, the creation of digital art pieces and prints. It is the culmination of this new digital work which is presented here for your consideration, but as I build up my portfolio, there will be more original one-off works as well. So welcome to my Baphomart shop, I hope you like something enough to buy it!

You can find out more about which cookies we are using or switch them off in settings.

This website uses cookies so that we can provide you with the best user experience possible. Cookie information is stored in your browser and performs functions such as recognising you when you return to our website and helping our team to understand which sections of the website you find most interesting and useful.

Strictly Necessary Cookie should be enabled at all times so that we can save your preferences for cookie settings.

If you disable this cookie, we will not be able to save your preferences. This means that every time you visit this website you will need to enable or disable cookies again.